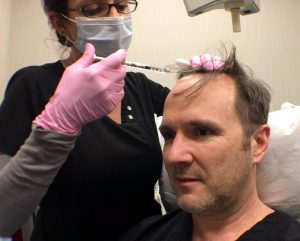 What is PRP for hair loss? For years I've heard about and read about PRP for hair loss and its use in the field of hair restoration. I used to call it "kitchen sink science" and I think that that was an accurate description when you consider how it was being promoted by some clinics. There were many clinics talking about the benefits of PRP for hair loss without any real effort to study or experiment in a scientific manner. Like most things in this field too many were eager for the quick dollar they could make from incorporating it into their practice.

It's been about ten years since PRP for hair loss has been introduced into the field of hair restoration but the treatment itself has been around for a few decades. It started out in sports medicine and has seen positive results in helping athletes to recover from injury faster than they would without PRP treatments. For hair loss, the treatment is supposed to help miniaturizing hair recover from the effects of DHT, dihydrotestosterone, and to give a fuller looking overall head of hair. After nearly ten years of not seeing credible evidence regarding PRP for hair loss I finally saw some positive information in 2015 when I first visited Dr. Jerry Cooley in Charlotte, North Carolina.

I went to his clinic because I was already in the area and he told me to stop by if I were ever in a position to do so, so I did! One of the first questions I asked when I arrived in his clinic was if he had any solid evidence of the efficacy of PRP for hair loss. He got a small smile on his face and said "have a seat" and we pulled up to his computer and where opened up his patient files. I will preface this by saying that I did not see mind blowing results like you'll see with a big hair transplant on a very bald patient. What I DID see was measurable, quantifiable, evidence that PRP (at least in his hands) is effective. He showed me a wide variety of patients including both male and female but one thing they all had in common was that none of them were actually bald. They were all simply thin. This varied from one patient to the next but the benefits were very clear. In fact, some of the patients had results that I believe rival some of the best Propecia results that have been documented. Thin wispy heads of hair turned into fuller, healthier looking heads of hair all from a few injections of platelet rich plasma mixed with ACell extracellular matrix and calcium thrombin. Dr. Cooley was one of the early hair loss pioneers to pull PRP into his clinic as a treatment along with a few other treatments and protocols he's pioneered, including the use of hypothermosol and liposomal ATP for graft storage and post-operative recovery. In fact, if you've been researching surgical hair restoration you have no doubt read about hypothermosol and ATP and the only reason you have is because of Dr. Jerry Cooley.

This brings us to the present. Last month I went back to see Dr. Cooley so I could film his clinic and give my official review, which is now underway. We started talking about PRP again and, long story short, he offered to provide a treatment for me so I could have a better understanding of what it's like and maybe get some benefit from it. Dr. Cooley was adamant that I may not see any benefit simply because the majority of my hair is transplanted and transplanted hair does not benefit from PRP/ACell treatments. I do however still have some fine and miniaturizing hair in the bottom half of my crown that he said may benefit so after getting prepped I had a treatment of PRP/ACell with Dr. Jerry Cooley. Of course, in true Joe Tillman style, I documented the treatment for your viewing pleasure:)

What is Ice FUE?

WE’RE BACK! The Bald Truth!