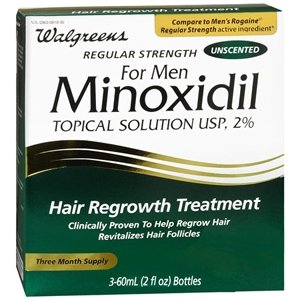 Minoxidil (also known as Rogaine in North America, or Regaine in Europe) is a hair loss medication that originally started out as a blood pressure medication known as Loniten. It is available in three different forms – it can be used as a tablet (for blood pressure), a topical solution (in 2% or 5% concentrations), or as a foam. Minoxidil is a vasodilator, meaning that it widens the blood vessels for an improved blood flow. For this reason, it is primarily prescribed as to lower high blood pressure, usually in ten milligram oral dosages. However, there are other uses as well.

Minoxidil has been clinically proven stimulate hair growth and successfully treat both male and female pattern hair loss (MPH and FPH), as well as alopecia areata (proven in a 1989 study). However, as one 2008 study puts it, “despite the long-standing use of minoxidil for balding, its mechanism is unclear”, though the evidence suggests that its vasodilating effects may enable the blood supply to nourish the follicle once again and stimulate new hair growth. Although the medical community may not understand exactly how minoxidil stimulates new hair growth, there is no shortage of evidence that it does cause the production of new hair growth in dormant follicles. A study in 2004, for example, takes a close look at three-hundred and eighty-one women who were suffering from hair loss. Of the three-hundred and eighty-one women with hair loss, one-hundred and fifty-three were given a 5% minoxidil topical solution, one-hundred and fifty-four were given a 2% minoxidil topical solution, and seventy-four were given a placebo solution as a control group. After forty-eight weeks, the women who were given the 5% solution regained the most hair, followed by those who took the 2% solution. However, those who were given minoxidil also experienced an increase in skin irritation and hypertrichosis – a condition that causes excessive body hair growth.

What are the Side Effects of Minoxidil?

Before taking this medication, always be sure to discuss these potential side effects with your doctor first, and always report them to your doctor during treatment as they occur: