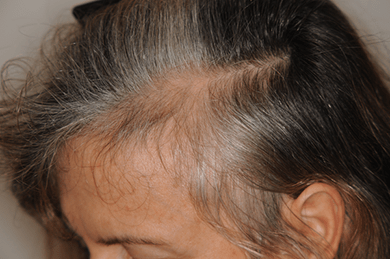 Miniaturization is when the hair follicle reduces its diameter and causes the hair to appear finer. The miniaturized hair follicle will continue to have a shorter and shorter anagen phase – thus, it cannot grow as long as the neighboring hairs, provided that the neighboring hairs are not undergoing this same type of physical change as well. Eventually, the hair follicle’s diameter reduces to the point where new hairs no longer grow. Miniaturization is a key identifier when visually inspecting the scalp for signs of hair loss. It almost always means that future hair loss can be expected. Miniaturization can also be identified as shorter hairs that have a kinky or “frizzy” appearance although this is not standard in all cases.

Miniaturization is caused by a male sex hormone called dihydrotestosterone (DHT). Even though DHT is classified as a male sex hormone, it is produced by females as well, albeit in much smaller amounts than males. As such, females still remain susceptible to miniaturization, though the chances are far less likely. In both males and females, DHT can gather in large concentrations within the tissue of the scalp itself. This heavy concentration of DHT can eventually become so dense that it blocks the hair follicle from the scalp’s blood supply. Without a blood supply, the follicle itself lacks the nutrition to grow healthy terminal hairs, and begins to miniaturize as a result. As the hair follicle miniaturizes, the hairs grow in less mature, and appear more vellus. Eventually, the hair follicle fully shrinks and becomes completely dormant.

What are Some Ways to Treat Miniaturization?

One of the most popular ways to remedy this problem is by taking medication. The goal is to lessen the amount of DHT in the body until large amounts of DHT can no longer block the follicle’s access to the blood supply. Since DHT is created when an enzyme called 5 alpha-reductase (5aR) metabolizes with testosterone, a special type of medication called a 5aR inhibitor can prevent this enzyme reaction from occurring. 5aR inhibitors ultimately reduce the amount of DHT in the system, which prevents DHT from gathering in the hair’s follicles and causing further hair loss.

Another way to overcome miniaturization is by having a hair transplant. Hair in the occipital scalp tends to be naturally resistant to the effects of DHT. It is not uncommon for people to show extreme signs of hair loss, yet still retain hair in this back portion of the scalp. Therefore, if the physician implants follicular units from the occipital scalp into other regions of the scalp that are experiencing hair loss, then normal hair can continue to grow. Even though the same amount of DHT is still present in the scalp’s tissue as before, the newly transplanted follicular units are not affected as they are typically resistant to DHT on the cellular level due to genetics.

Is Everyone Susceptible to DHT?

No, not everyone is susceptible to hair loss from an abundance of DHT. An individual’s susceptibility to DHT is entirely dependent on their genetics. Additionally, this gene expresses itself with age, which means that a susceptibility to DHT does not manifest itself until adulthood. Quite simply, some people experience hair loss due to miniaturization, and some never do. That is not to say that DHT is the only determining factor for developing alopecia. A person who is not vulnerable to DHT may still experience hair loss from a host of other unrelated conditions.