What is Donor Dominance? 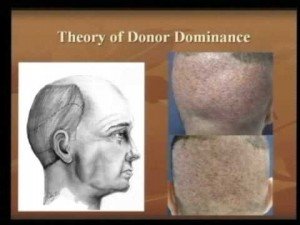 Donor dominance is a theory proposed by Dr. Norman Orentriech in 1952 after he successfully transplanted hair from the back of a patient’s head into the balding area of his scalp (recipient site). Dr. Orentriech proposed that tissue taken from the “donor zone” (the horseshoe-shaped ring around the occipital scalp) retains “characteristics independent of the recipient site”. This was first published in the Annals of New York Academy of Science in 1959.

What is the Importance of Donor Dominance?

DHT is a hormone, which, for some people, binds with cellular receptors in hair tissue to the point that it causes various degrees of hair loss and baldness over time as a result. Hair follicles from the donor zone, however, are generally considered to be resistant to DHT, no matter where on the scalp it is transplanted. Therefore, donor dominance explains why the transplanted hair continues to grow where other hair could not, despite an equal concentration of DHT in the hair’s tissue.

There have been some challenges to the theory of donor dominance in recent years. Dr. O’Tar Norwood – the same doctor responsible for the Hamilton/Norwood hair loss charts – was the first hair doctor to officially challenge this theory after he noticed that a transplanted hair took on the same characteristics as the recipient site. While following up with one of his patients, Dr. Norwood observed that a hair follicle unit which was not wavy to begin with soon adopted a wavy texture after it was transplanted into a bald spot that had once produced wavy hairs. According to the principles of donor dominance, the donor hair should have retained all of its characteristics, and continued to grow in non-wavy. In this case, however, it appeared to Dr. Norwood that the hair had conformed to the wavy texture of native hairs that previously grew in the recipient site.

A 2005 study also refutes the legitimacy of Dr. Orentriech’s theory. Here, hairs from the occipital scalp were grafted onto the leg, where they were observed to grow more slowly. The hairs were then grafted onto the nape of the neck, where they again saw a change in growth rate. Based on these results, researchers concluded that the recipient site has a measurable impact on the characteristics of the donor zone hair.

Despite these new studies, donor dominance is still widely regarded as fact by the medical community at large. Whether or not the donor zone tissue retains all of its characteristics, or instead shares some of its characteristics with the recipient site instead, it remains clear that tissue from the donor zone still retains its DHT-blocking properties no matter where on the scalp it is transplanted. In this sense, the theory is still valid.