What is a Manual Punch? 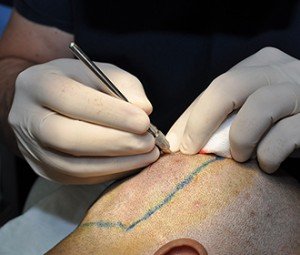 A manual punch a cylindrical tool with a sharp edge designed to perforate the skin during follicular unit extraction (FUE) procedures. To use one, a physician rotates the punch back and forth between the thumb and forefinger while applying pressure to the donor zone. The sharp end of the punch is slipped over the hairs of the target follicular unit and the skin tissue is “scored” (cut) to a depth of 3.5 to 4mm – roughly the depth of an average human hair. Once the desired depth is reached, the graft is gently extracted using forceps.

A manual punch usually uses a sharp punch tip but technically can include the use of a blunt punch tip. A punch with a sharp tip allows the physician to further separate the graft from the surrounding tissue with ease, while a blunt tipped tool can lower the chances of transection. With the blunt nature of the punch the tip can easily enough score skin tissue but it is more difficult for hair follicle transection to occur compared to a sharp punch tip. Blunt tip punches have a more difficult time perforating the surface of skin tissue so a physician typically begins with a sharp tip, and goes deeper into the tissue using a blunt tip. This adds time to the procedure, however, which is why some physicians may choose to use a sharp tip only. It is ultimately up to the doctor.

The Advantages of a Manual Punch Compared to a Motorized Punch

Many doctors claim a manual punch gives them better feedback during the procedure, which allows for easier navigation around the follicular unit – that is to say, a doctor would be able to feel the difference between touching the hair shaft, for example, and touching the surrounding connective tissue. This touch sensitivity is greatly reduced when using a motorized punch, though doctors are usually able to readjust after enough practice. Doctors are also able to feel when their tips are getting dull more easily with a manual device than when using a motorized punch. These claims are not verifiable but are only opinions. Users of motorized punch systems claim that transection rates are less than that of manual punches due to the stable axis at which the punch spins. It also eliminates wrist fatigue and overall harvest rates can be quicker.

The Evolution of Manual Punches

Manual punches used to be very large. Dr. Orentreich, who pioneered hair transplants in the West in the 1950s, used a large 4 millimeter manual punch for his hair transplants. In comparison, the smallest punches used nowadays are less than 1mm in diameter. In fact, according to a 2015 review, most punch devices are between 0.8 and 1.1 millimeters in diameter but several practitioners will include a .7 and .75mm punch in their arsenal of tools.

Some of the advantages of smaller manual punches as claimed by doctors that use them are:

A 2014 study compared 30 Indians to 30 Europeans to see if ethnicity plays a role in follicular unit extractions. For Indian patients, using a 0.9 millimeter punch caused a significant amount of transections as opposed to the 1.0 millimeter punch. With the Europeans, however, the 0.9 and 1.0 millimeter punches showed minimal differences. The theory is that Europeans have finer hairs on average, which respond better to a punch with a thinner diameter by having less transections.