What is A Single Blade Scalpel? 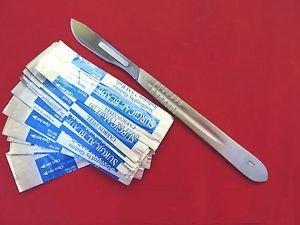 A single blade scalpel is one of the many instruments a physician can use during a hair transplant, and it is the preferred tool of choice for follicular unit strip surgeries (FUSS). The word “scalpel” comes from the Latin word “scallpellus”, a term adopted by the Romans after they learned of the instrument from Hippocrates, a legendary Greek physician. Hippocrates himself referred to the scalpel as a “macairion”, based on the “macairon” – an old-fashioned sword which was sharp only on one side.

How is a Single Blade Scalpel Used?

Single blade scalpels are used in the following ways:

To be perfectly clear, any blade that comes into contact with the donor zone will cause a certain degree of damage to the hair follicles (known as transection), whether it is single-bladed or not. Therefore, it is up to the physician to use their own discretion when selecting the number of blades to use. However, a single blade will not cause nearly as much damage to the hair follicles as a scalpel with two to seven blades. In fact, the number of blades often directly increases the amount of hair follicles which cannot be used due to transection.

One study found that up to 25% of hair follicles are damaged by multi-blade scalpels during donor zone dissection, and that even the best surgeons would still lose up to 10% of the overall follicular harvest from the donor zone. Since the donor zone contains a finite number of hairs, it is important that the number of transected follicles be kept to an absolute minimum. For this reason, a single blade is much more efficient. A single blade also yields a greater degree of movement and control for the physician during the procedure. For this reason alone, multi-blade scalpels are no longer recommended. They also increase the likelihood of scarring and infection.

A major advantage of a multi-blade scalpel over a single blade, however, is that the procedure can be performed more quickly. Some clinics have reported that total donor excision time can be as little as ten minutes. A typical single blade scalpel FUSS procedure will be on average 45 minutes to over one hour. Multiple blades can cover a greater portion of the scalp in less time. However, due to the amount of damage multi-blade scalpels cause this advantage is considered to be a moot point.