What is Saw Palmetto? 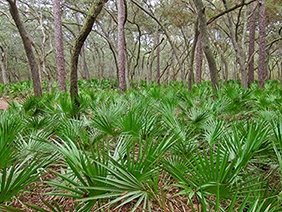 Saw palmetto is a slow-growing plant known as a “fan palm”. It grows in the Southeastern region of the United States, and some specimens have shown to be up to seven-hundred-years-old. Saw palmetto is available over-the-counter as an extract or as one of several active ingredients in hair loss formulations. It is available in most grocery and health food stores.

Saw palmetto may be able to inhibit the 5 alpha-reductase enzyme from metabolizing with androgens (male sex hormones) into dihydrotestosterone (DHT). DHT is responsible for regulating many functions within the body, including prostate growth. Unfortunately, DHT never signals for the prostate to stop growing, which can cause it to block bladder and prevent urination. If saw palmetto is able to prevent DHT from forming, however, then it may be able to alleviate the potential problems arising from benign prostatic hyperplasia (BPH). One study notes that the use of saw palmetto for prostate conditions dates as far back as the 1880s, though its efficiency has not been established by modern science. A 2000 overview notes that the plant may help men with lower urinary tract symptoms, but such studies are “limited by methodological flaws, small patient numbers and brief treatment intervals”. In other words, the medical community has not decided the fan palm’s overall efficiency. While limiting DHT production is possible through modern medications known as 5aR inhibitors, science has yet to discover whether or not saw palmetto truly has the same 5Ar inhibiting properties on a therapeutic level. A 2006 study conducted by the Massachusetts Medical Society took 225 men who were at least fifty-years-old and had “moderate-to-severe” problems with BPH, and gave them 160 milligrams of saw palmetto extract once a day. According to the study, researchers were unable to find any significant changes in urinary flow or prostate size compared to a control group who took a placebo. Nonetheless, the study notes that saw palmetto is faithfully used by over two million American males for BPH.

For whom is Saw Palmetto not recommended?

If you have any of the following conditions, you should consult with your doctor prior to taking this herbal extract:

What are the Side Effects of Saw Palmetto?

Although the herbal extract is generally well-tolerated, the following side effects have been known to occur: