What is Retrograde Alopecia?

Retrograde alopecia is a form of alopecia that is not very well known but is found to be very common among the general population. It is estimated that approximately two out of three hair loss sufferers experience some degree of retrograde alopecia in addition to their more obvious male patterned hair loss problems. Retrograde alopecia can manifest similarly to normal male patterned hair loss in that it occurs in various locations of the scalp with varying degrees of severity but these areas are limited to the back and sides of the scalp below the borders that are defined in the Norwood Hamilton hair loss chart.

Retrograde alopecia can also be referred to as “vertical alopecia” due to the fact that it usually involves thinning and density reduction in a vertical fashion, moving up from the nape of the neck into the lower occipital zone (traditional donor area) of the scalp with rare cases reaching the occipital bone. Other forms of RA can include vertical thinning on either side of the scalp above the ears, leaving a distinct demarcation between lower density hair closer to the ears and higher density hair higher on the scalp. In some cases this higher density hair manifests in a narrow band of hair that should be avoided in any surgical hair restoration. 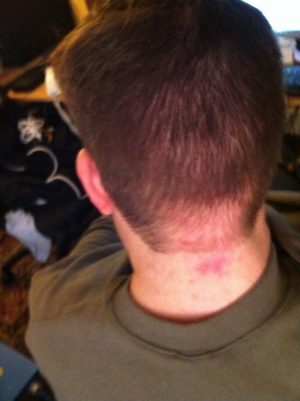 Is There A Pattern To Retrograde Alopecia?

RA can also be seen on the sides of the scalp, forward of the ears in the lateral temporal region, leaving the frontal sides of the scalp very thin. Oftentimes it continues above the side burns but not affecting the sideburns specifically and other times the sideburns are also partially affected. Retrograde alopecia can also manifest as an “arch” that not only includes the areas above the ears but also behind. It is highly recommended that the finer hairs found in an area of the scalp affected by retrograde alopecia to be excluded from any hair restoration procedure as they are sometimes mistakenly harvested for their finer caliber diameter. The common purpose is to use them for the frontal hairline, which ultimately leads to failure since they are being miniaturized, and either do not survive the transplantation process or fail to continue to grow after hair transplantation due the issue of continued miniaturization and eventual follicular death.

Treatment of retrograde alopecia is rarely with the use of surgical intervention and it is highly recommended to avoid surgical reconstruction of regions affected by retrograde alopecia. Medical treatments such as Propecia and/or Rogaine are the preferred treatments as well as auto blood and plasma therapies and potentially LLLT (low level laser therapy).