Propecia testicular pain is spoken about quite a bit and some of them are very real. This doesn't mean that they can't be tolerated while they eventually dissipate because many times, in my own experience, this is exactly what happens. The caller in this clip from a recent episode of "Spencer Kobren's The Bald Truth" talks about Propecia testicular pain he was experiencing and he wasn't sure what to do about it. Spencer and I both share that we both experienced the exact same thing as we've both mentioned our own Propecia testicular pain in the past and what we discussed has been shared by thousands of other men around the world. But, these Propecia testicular pain issues are, the way I see it, very minor. My own situation involved having the feeling men get a few seconds after they get kicked in the groin. I reference this on the show as something that happens during basketball practice because I always think back to an incident in high school when I did indeed get kicked in the groin (by mistake) when I was on my high school basketball team during a practice session.

Propecia Side Effect Truth - Spencer Kobren and Joe Tillman discuss one of the most common transient side effects of #propecia, tessticular Pain. #finasteride, #thebaldtruth

Posted by The International Alliance of Hair Restoration Surgeons on Friday, November 10, 2017 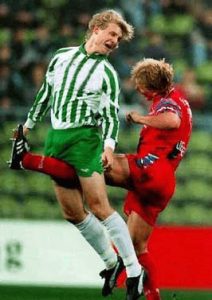 When I had my Propecia testicular pain that included testicular ache (not really a pain) the sensation dissipated after about three to five weeks and it never really came back. The exception to this was whenever I would stop taking the medication for various reasons and I would restart later, the same testicular ache would return and I believe this is the case for others that have experience Propecia testicular pain. In fact, I don't believe I've ever heard of anyone having testicular ache or pain as one of the permanent Propecia side effects that have been complained about. The good news is that the caller's doctor also said that the caller should simply "push through" and give his body time to adjust and the side effect should go away.

Hair Banking Today – Should You Do It?

Is This The Treatment We’ve Been Waiting For?