Matthew McConaughey Hair Transplant. It's more than a catchy title for a hair loss blog post. I rarely ever get involved in discussions about celebrity hair transplants because I think they're boring. Like in most subjects I'm not a fan of conjecture and speculation especially when it has nothing to do with me or if it will not ever affect me in any way. It's just a waste of time. I also think that it's just kind of tacky because celebrities are people too and I don't think it's fair to talk about their hair loss if they themselves are not talking about their hair loss. How would you like it if complete strangers started talking about your hair loss and it was a subject that really bothered you? Now imagine them talking about your hair on a public forum or on Youtube. It doesn't sound fun, does it? That is why you won't find me involved in such discussions.

There is a caveat, however, in that I'll talk about celebrity hair loss if the celebrity with hair loss talking about it themselves but even then it is still something I'm not completely comfortable with. But, if a celebrity actually goes so far as to discuss what they have done to fight their hair loss then that is a different story but even then it is something I'll only talk about if I know what they are saying is false. This brings us to Matthew McConaughey and what he has said publicly about his own hair loss and what he's done to fight it.

Could it be that he knew this photo was in the public domain and there was nothing he could do about it so he decided to address it front and center? Could it be that his agent thought this might be an issue? I actually think so because the rumors were at one point quite common and I believe this was his effort to just address it. The problem is that the way he addressed it was not believable, at least not to me. Why? Because no topical solution works as well as it appeared to have worked for Matthew McConaughey's hair loss. In addition, I know for a fact as confirmed by celebrities I know personally, that every major celebrity is constantly being sculpted into their own brand every time they step out of their house. What I mean by this is that anytime a celebrity is in public they have a small army of makeup artists and public relations "handlers" that make sure the celebrity looks a certain way. Celebrities are in fact their own brand and if as a brand they are seen as cool, hip, attractive, etc. then that brand will prosper because consumers will pay to see that brand (in movies/tv), be like that brand (clothing/merchandising) and this feeds the need to monitor and control how the celebrity appears in public. It really is a big production just for some celebrities to walk out of their own front door. I've even experienced this when I've been contacted by agents in the past when they were helping their clients to find the best clinic. One of the first things a typical celebrity agent will bring up is the need for absolute anonymity and the need to not look like their celebrity client just had surgery.

Here is the problem with the claim. The first problem is that the basics of proper hair restoration ethics is wildly violated in that you don't perform two surgeries in the same area in such a short time span. I'm referring to the time it takes for grafts to begin to grow which usually takes three to five months just for the first sprouts to pop through the skin. Ask any doctor and they'll tell you the same. So if the first grafts take that long to pop through this means that there are many follicles that have yet to start growing so where those follicles are is a mystery. If you are going to go back into the same area, in this case the hairline, how can you avoid damaging the new follicles from the first procedure if you can't even see them yet? That is the danger; if you can't see where the first round of follicles were placed then you will destroy those follicles from the first procedure thus rendering the first procedure essentially useless and this will effectively jeopardize the overall final result. It just flies in the face of decades of established protocols and basic common sense. 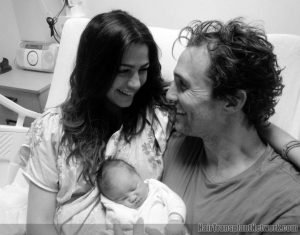 The second problem is simple to figure out when you look at the timeline of Matthew McConaughey's varying stages of follicular fortitude. Put simply, Matthew McConaughey's hair looks no different than his 1999 mugshot at various times over the past 18 years. Granted, in 1999 he wasn't an A-list celebrity but since the "branding" of Matthew McConaughey has become more important we can see how this incredible hair loss reversal hasn't been all that incredible. In 2010 I pointed out how his hair loss was still present, same as it was in 1999, when he was in the hospital for the birth of his first child. He obviously didn't give a damn at that point, rightfully so, and this proved back then that he hadn't had a hair transplant. But at the time of this writing it has been a full seven years since his first child was born and that revealing photograph was shared online. He could have had a hair transplant or two since then and we wouldn't know one way or the other. The problem with this idea is that I do know better and I have the proof shown in the video I shared in this blog post. You'll have to watch to find out the truth.

Doctor or Technician for Your FUE?