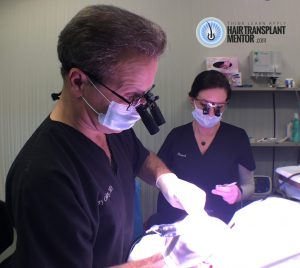 Part three of the FUE repair hair transplant documentary with Dr. Jerry Cooley of Charlotte, North Carolina is now available. To remind you, the patient in this documentary already had FUE hair restoration at another clinic in North Carolina and is having FUE repair surgery with Dr. Cooley. There is also an interesting part of the documentary where we see, for the first time, nearly 1000 grafts extracted via FUE in only thirty seconds! Ok, not really, but it sounds cool:) In reality, you see the first ever time lapse photography/video of an FUE repair surgery being performed. I had my video rolling but I also had my Nikon on a tripod shooting several hundred images over the course of the morning while the grafts were being extracted by Dr. Cooley and his assistant, Brandi. The final result looks wickedly cool, if I do say so myself. My next project will be to show an FUE recovery in time lapse;)

This FUE repair case wound up being quite interesting because, as noted in previous episodes, the patient had already undergone an FUE surgery elsewhere in North Carolina but he experienced poor growth AND scarring that was unacceptable. The issue wasn't really a problem for the patient as he never noticed the scarring before but once he saw his scalp shaven he realized what had happened and what fairly upset. Who could blame him? So Dr. Cooley made the game plan which involved an extra degree of caution with removing the new grafts from the donor zone. In FUE in general the goal is (or should be) to remove only enough hair to get the job done without taking so much hair that the donor zone is cosmetically affected. This means that the donor zone shouldn't look any thinner than before the surgery even though simple math dictates that this eventuality is guaranteed. So how is this done without making it visibly obvious? Good FUE doctors will stay well below the "50% rule". This is the general idea that a patient can lose 50% of the hair in any given area without it making a cosmetic difference. This is true in many cases but it is not an absolute and it highly subjective to a variety of variables. Regardless, in a situation like this one the care must be extreme. When previous work has been performed, particularly like in this case, then it should be established how many grafts are present in each cm2 of the donor zone. Any measurements taken will identify that density changes from one area of the scalp to the next so a blanket estimate cannot be reliably made. Watching Dr. Cooley work around the existing scarring was impressive and I stand on record that the team of Dr. Cooley and Brandi is without peer in the hair restoration world, or at least not from what I've seen  and heard in the past fifteen years. It's like they're telepaths having a conversation with each other that no one else can hear. This is one of the highlights when I come to their clinic so I can watch them work together.

I hope you enjoy this episode along with the first ever time lapse video of an FUE surgery.

Natural Hairline. What Does This Mean?