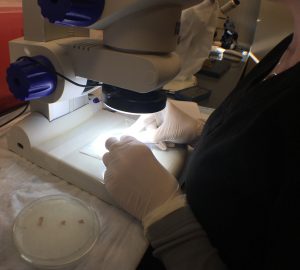 FUE hairline repair is becoming more common, both in terms of how grafts are extracted to correct a previous hairline hair transplant as well as how some grafts can be removed that are part of a bad hairline result. This patient received the former where he had his bad hair transplant result from another clinic that necessitated an FUE hairline repair by Dr. Cooley and the team at Carolina Haircenter in Charlotte, North Carolina. The first procedure, before the patient came to see Dr. Cooley, was a 2000 grafts procedure that was designed to lower and thicken his frontal zone. The good news is that the previous doctor was not aggressive with the hairline design but we found out later that this was due to the patient desiring a conservative approach. He had the forethought and wisdom to not get too greedy with his hairline as he recognized the potential need for more surgery in the future so he did not want to take too many grafts from his donor region to achieve an aggressive and low hairline.