What is the Anterior Scalp? 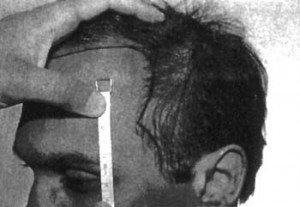 The word “anterior” means to be in the front (the “posterior” being the opposite). In regards to hair terminology, the anterior scalp consists of the frontal regions. From a top-down perspective, this area includes the hairline, the temples, the forelock, and regions immediately behind the hair line. The anterior ends at what’s known as the midscalp.

A forelock refers to the patch of area that begins at the mid-scalp (this is called a central forelock) and grows downwards towards the anterior scalp (this is called a frontal forelock). The frontal forelock is a prominent lock of hair located just above the forehead around the center of the anterior hairline. In a balding pattern known as the “widow’s peak” – which especially affects males – the forelock is the area that retains a partial amount of hair.

The Anterior Scalp and Frontal Balding

It is important to note that these are not the only two styles of anterior hair growth, but rather two opposite ends of a wide spectrum of hair growth. That is to say, there are many anterior hairstyles that are not classified as “low” or “high”, but as somewhere in between.